Create an Account - Increase your productivity, customize your experience, and engage in information you care about.

Sixty miles to the southeast of Kansas City, nestled among the wooded, rolling hills of west-central Missouri, and 10 miles east of Warrensburg, is the bustling community of Whiteman Air Force Base. Today Whiteman is the home of the 509th Bomb Wing, which operates and maintains the Air Force’s premier weapons system, the B-2 Stealth Bomber. 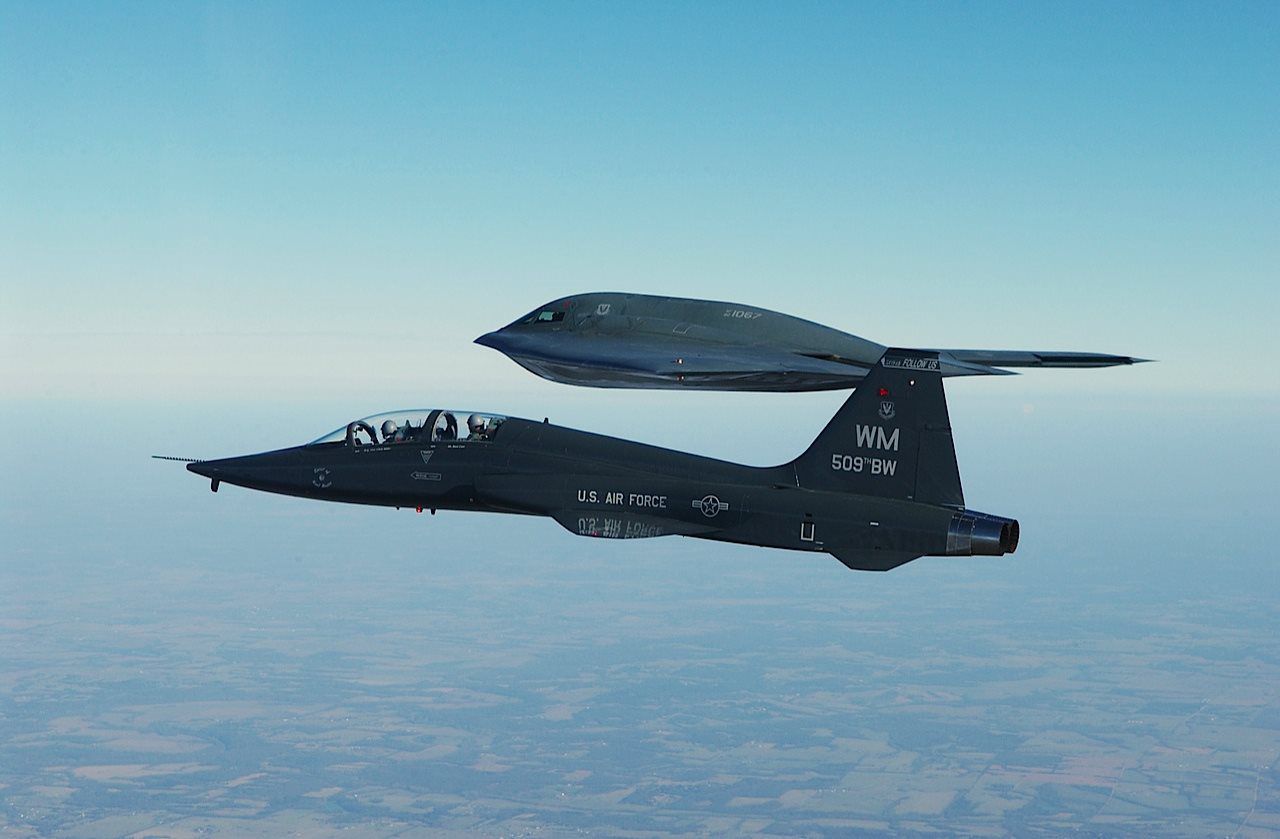 Whiteman’s proud heritage dates to 1942 when U.S. Army Air Corp officials selected the site of the present day base to be the home of Sedalia Army Air Field (Sedalia is a neighboring community, 20 miles east of the base) and a training base for WACO glider pilots.

The pilots of one unit trained at the base, the 314 Troop Carrier Group, participated in the invasion of Sicily in July, 1943 and the D-Day invasion of Normandy on June 6, 1944.

Following the war, the airfield remained in service as an operational location for Army Air Corp C-46 and C-47 transports. In December 1947, the base was inactivated but with the birth of the U.S. Air Force as a separate, independent service, and subsequent formation of the Strategic Air Command (SAC), the site of the former airfield was considered for other missions. For example, in the late 1940’s it was considered as a possible site for the “West Point of Air,” the U.S. Air Force Academy.

The story of the 351 Strategic Missile Wing at Whiteman began in April 1961 when test borings made in the area around the base determined the geological make-up would support a land-based ICBM system. Three months later the DOD announced plans to base Wing IV of the Minuteman ICMB system at Whiteman. Groundbreaking ceremonies with a host of dignitaries in attendance were held in April 1962 at the site now called Oscar-01. The 351st Strategic Missile Wing was activated on February 1, 1963 to oversee construction and act as base operating unit. Amazingly, the construction and equipping of the 150 missile sites and 15 launch control centers took only two years, two months, and two weeks to complete. On June 29, 1964, the 351st went on full operational alert. The 165 individual sites (15 command centers and 150 launch facilities) were scattered throughout Missouri. All the sites had to be separated by at least three nautical miles, and the resulting missile field covered over 10,000 square miles. The Hardened Intersite Cable System, made up of over 1,770 miles of buried cable, connected this web of facilities.

The launch control facility for the 510 Strategic Missile Squadron, Oscar-01, was programmed for an area southeast of the base, but the water table associated with the Lake of the Ozarks made construction there impractical. Instead, the AF placed the facility on Whiteman AFB, the only operational ICMB missile launch control facility actually located on a base anywhere in the world.

The end of the Cold War spelled the end of the 351 SMW and deactivation of the Minuteman system. On January 8, 1993, the wing’s first launch control center shut down operations and on May 18, 1995, the last Minuteman missile was removed from its site. However, custody of Oscar-01 passed to the 509 Bomb Wing. It was retained as a museum dedicated to the thousands of men and women who sustained the ICBM force during the Cold War. Public tours can be arranged.

The 509th Bomb Wing traces its historical roots to its World War II ancestor, the 509th Composite Group, which was formed with one mission in mind: to drop the atomic bomb. The Group made history on August 6, 1945, when the B-29 “Enola Gay” dropped the first atomic bomb on Hiroshima, Japan. On August 9, 1945, the Group again unleashed the atomic inferno upon Nagasaki. Within the month, the Japanese signed the terms of surrender aboard the USS Missouri.

In late 1945, the Group settled into Roswell Army Air Base, New Mexico; twelve years later the 509th moved to Pease AFB, New Hampshire. SAC decided in 1965 to equip the 509 BW with B-52s and KC-135s. On September 30, 1990, the wing was transferred to Whiteman AFB. On December 17, 1993, the ninetieth anniversary of Orville Wright’s historic first successful, controlled, heavier than air powered flight at Kitty Hawk, North Carolina, the world’s most sophisticated and advanced aircraft, the B-2 Advanced Technology Bomber, the Spirit of Missouri, arrived at Whiteman Air Force Base.

In August 1951, SAC selected Sedalia AFB to be one of its new bombardment wings, with the first all-jet bomber, the B-47 Stratojet, and the KC-97 aerial refueling tanker assigned to the unit. Construction of facilities was conducted by the 4224th Air Base Squadron until October 20,1952, when the base was turned over to the 340th Bombardment Wing. The first B-47 arrived on March 25, 1954 and by the end of the following month the wing had 18 bombers assigned.

On October 12, 1954, the first KC-97 arrived. On August 24, 1955 Mrs. Earlie Whiteman of Sedalia was informed that Sedalia Air Force Base would be renamed Whiteman Air Force Base in tribute to her son, 2nd Lt. George A. Whiteman. Lt. Whiteman was one of the first airmen killed during the assault on Pearl Harbor on December 7, 1941. The dedication and renaming ceremony took place on December 3, 1955.

The B-2 first saw combat on March 23, 1999, during Operation ALLIED FORCE in Serbia and Kosovo, the first sustained offensive combat air offensive conducted solely from U.S. soil. Although the B-2s accounted for only 1% of all NATO sorties, the aircraft’s all-weather, precision capability allowed it to deliver 11% of the munitions used in the air campaign.

In October 2001, the B-2 bombers led America’s strike force in Afghanistan, hitting the first targets in the country to “kick down the door” for Operation Enduring Freedom. The combat missions lasted more than 40 hours, with the aircraft operating continuously for more than 70 hours without incident before returning to Whiteman.

On March 21, 2003, the famous “shock and awe” campaign of Operation IRAQI FREEDOM began with the unprecedented use of precision-guided munitions by the B-2. The campaign also marked the first time the B-2 aircraft flew combat missions from both Whiteman AFB and a forward deployed location simultaneously.

In 2008, Whiteman AFB welcomed the Missouri Air National Guard’s 131st Bomb Wing into its midst as an associate B-2 unit. In this capacity, Missouri’s citizen-airmen work alongside active duty personnel to maintain and fly the nation’s most advanced bomber.

The A-10 Thunderbolt II is a single-seat fighter jet designed to provide close air support for ground forces by attacking tanks and other armored vehicles. The A-10 was designed around the GAU-8 Avenuenger, a heavy rotary cannon that forms the aircraft’s primary armament. The cannon is capable of firing 3,900 rounds per minute. The A-10’s hull incorporates over 1,200 pounds of armor and was designed with survivability as a priority, with protective measures in place which enable the aircraft to continue flying even after taking significant damage.

The 1-135th Attack Aviation Battalion’s mission is to conduct attack, reconnaissance and security operations that compliment other maneuver forces. They control 13 AH-64D Apache Longbow Helicopters. The Missouri National Guard is the only component of the armed forces that has two missions. Our federal mission is to provide federal support when called upon by the president - this could be for overseas contingency operations or federal emergencies like Hurricane Katrina. Our state mission is to support the governor of the Missouri in times of state crisis.